skip to main | skip to sidebar

Pheewww! It's up. I did have grand plans to put everyone's blog address with their photo but I was running out of time and steam. So feel free to add your blog address in the comments section. We think there are still more pics to come so keep on sending them to backtack3ATgmailDOTcom and we'll do another upload later this week.

It looks fantastic! Thank you for playing and we hope you enjoyed yourselves. The LIST will continue to be updated and we'll post soon.

Howdy ya'll, Nicole here, I'm running a little behind with the flickr, bloody headache. I'll be working on it today, Sunday, in my part of the world.

The poll is closed and we have a winner, congrats to Pijije we'll be in contact soon. Thanks for voting!

Have a great weekend.
Posted by back-tack at 5:50 PM

Ok you ready? It was difficult, we had a little negotiating, all friendly only a thumb wrestle involved. Alison is preggers, so thumb wrestling's about as energetic as we'll get at the moment! The criteria for our judging, well that would be telling, however it's all in good fun and not to be taken too seriously, we could go on and on justifying our choices. Saying that it was quite tricky coming up with just 5, there could have been a whole lot more and the 5 here are a great representation of backtack3 for various reasons as I'm sure you can see. So on to the voting...

The five you're voting on, in alphabetical order. Click on the link on each finalist to see their post and further pictures of their creation. We encourage you to read the posts and check out further pictures on the finalists blogs.

Voting will close Saturday 24 June, who knows which timezone, just get in quick and vote. Winner will be announced at the same time that the flickr gallery goes live.


What's up for grabs? Well lovely Hillary at Wee Wonderfuls has donated a copy of her bookLET and, yes, there's more, one of her darling softies, Harriet. 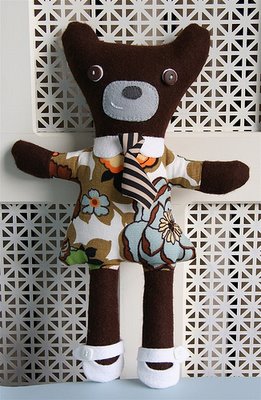 This is the list you've all been dreading...and the one we hate to have to put up, but felt it was a necessary part of running backtack from now on.

I've spent the last few days going through blogs and cross checking emails and blogs, and then crossing names off lists. I know from reading your blogs that most of you have actually made something, and that there is a lot still travelling in the post and that some of you are late but have let your partners know. I wont cross your name off though till I know it has been received. So if your name appears below, please let me know when your parcel arrives safely, or if you have received a parcel, let us know for your partner. If I have somehow missed a blog entry or email stating receipt of goods, please also let us know (the trawling is being done very late at night by a very tired me so I know I'll have missed some people). The list will remain up indefinately - hopefully getting smaller and smaller as the next week or so goes by. Please - don't fret at this stage if your name appears below - a lot of people's names appear who I know have made and sent something and who we have received finished photos from. I will try and update the list as often as I can and set your minds at ease. At this point we are calling it an Outstanding List. It will be upgraded to Blacklist in the near future and we will make it absolutely clear on this blog when that list has become something more. This list is in no way a reflection of the people on it, and is not intended to be - it is our working list at the moment, and a way of flushing out potential problems early. We also like to think of it as a way of seeing all these parcels arriving all over the world - it's great to see the list shrink!!

There's a few of you who haven't blogged about bt3 at all, or have done very little blogging in the last month, and I'll follow those people up seperately and make sure everything is ok.

The following are the names of outstanding players as of 3rd July 2006:: THIS WEEK THIS LIST WILL BECOME A BLACK LIST. I WILL POST AGAIN AND REITERATE THIS LATER IN THE WEEK JUST BEFORE IT OFFICIALLY BECOMES A BLACKLIST. IT WILL THEN BE THE RESPONSABILITY OF THE PLAYERS LISTED TO PROOVE THEIR PARCEL HAS ARRIVED, OR THAT THEY HAVE MADE AN ALTERNATIVE ARRANGEMENT WHICH IS SUITABLE FOR THEIR PARTNER. THIS LIST WILL REMAIN ACTIVE INDEFINATELY.


Blow northern wind...
Knitting Arrows
Knit & Play with Fire
sheep in the city
Posted by back-tack at 7:40 AM

THE POSTMEN ARE VERY BUSY

The 10th June is rapidly approaching, and I've been trawling through blogs in search of package arrivals. There's been a lot of posting about works in progress, some fantastic teaser shots, and shots of actual finished pieces, which have been so lovely to look at. We've really appreciated those people who have sent in finished photos, and urge the rest of you to do the same. I've crossed off any names of senders I have seen have arrived at their destination, and on the 11th June, I'll post the full list of those people who have yet to receive. So far the list is long, but we're hoping it gets smaller quickly as packages start arriving and you guys let us know they've arrived either via your blog, or via email to backtack3ATgmailDOTcom. There's a lot of very busy postmen out there at the moment!

We've been trawling through the blogs for another reason as well: A little while ago we said we had something special lined up. Well, we'd like to announce that something special to you all. After we started BT3, we decided it was the perfect theme to run a little competition through. So we've waited till now, so that everyone is on an even playing field and it's about what you've made for your partner and not about winning a competition, to announce this. On June 20th, we'll announce a shortlist of 5 softies which we think are great. They will be of Nicole and my choice, but it will be your votes on a poll here on this blog which will decide the winner. The poll will be up for 3 days, and we'll announce the winner on the 24th June via email, on this blog, and on both Nicole's blog, and my blog. You'll be able to see all the received entries on the flickr page when that has been uploaded - another good reason to get us your pictures!!

The winner will receive a generously donated copy of Hillary's Wee Wonderful booklet that she is having published, plus some other goodies we will put together for you.

We'd like to give something back to you guys for the support and enthusiasm you show for backtack and as a way of saying thankyou.

Click on this link to send us an email.

back-tack
You'll have to wait and see.